Just over the hill, on Ghost Mountain, beneath the Lenope Rocks, from where the old ones could see Turtle Rock in Erwina and the Lehigh Valley Gap in Bethlehem, hidden in baleful shade, under some small trees, in a fence line separating the upper and lower pastures – there’s a sentinel. Or perhaps, one of the ghosts of Bucks county. An icon embedded in the world’s collective DNA; owned by almost all of us in general and divided in some very strange economic pieces specifically. 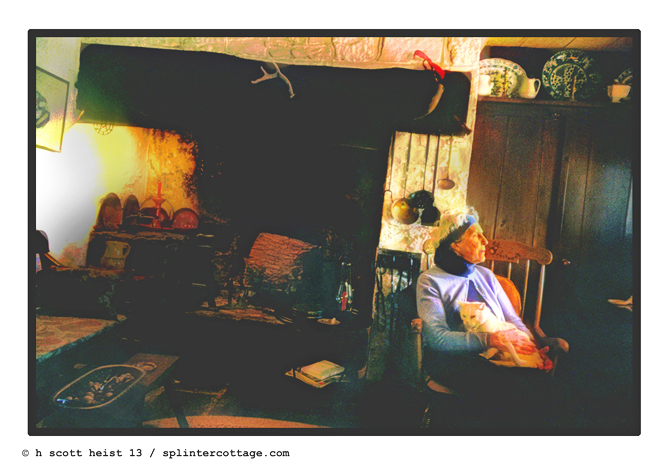 If Toots is the key to Lassie, Jere Knight is key to Toots. Jere is: complicated , Cantankerous, unerringly competent, and chronic over achiever. Most people spell Jere with a “y”. Sure loved her. A keeper of the flame in the arts community of the ‘30’s, executrix to the e.e. Cummings estate, associate to a Pulitzer. Too many stories. But the impression is critical. Complete accomplishment; complete support and total loyalty without entitlement. And did I say: “Independent to a fault.”?

Her friend: Helena Wythe  (Hurd) painted a lovely portrait of her when they were both young, in the 1930’s. Jere wants photographic copies without letting the painting out of sight. Completely understood. I was back from the latest magazine and waiting for the film. It was a perfect time. If only life was that easy.

All is explained to me with the gravity of another IBM report. In weary conclusion, her blues eyes wander to Maman Cat sitting in the kitchen window. Big, white and almost 20 years old. Calm and purring. Jere, the handsome woman in her 80’s, still dressed in the blue that her mother said matched her eyes and “would save her from ugliness.” Mothers!

Fortunately, we are at her kitchen table over cups of instant coffee rather than a conference room. I put both my hands over hers and said: “Jere, it would be my pleasure.” I had stopped calling her: “Mrs. Knight” nearly five years earlier. This round was mine. But as the French say: Je fais payer. (I must pay.) And that was where Jere took part of her education.

Now the photos are done. I have a lovely photo of Helena’s blue-eyed Jere before Spring House. It is time for the bill. “Don’t worry about it.” After a bit of silence enforcing the “non violent bludgeon Quakers call: Eldering . “Strong fences make good neighbors!” So with bill and check exchanged order is restored, And Jere and I sat for a few merciful moments without saying a bloody thing. The exquisite pleasure of sitting with a friend. Who in the hell wants perfect friends. We wouldn’t have any. Surely not Jere or I.

Bare with me a moment. In fact, I haven’t left “Toots” or “Lassie” at all.

Flashback: Sometime in the 1930’s as the tale grows bushy and begins to wag

The story related to me is from the time when the printed word was king, Eric’s power as a critic grew and that power meant money to the studios. Like every critic, Eric felt he had a few good scripts and films inside himself. He was a hell of a writer. Remember Elmore Leonard’s reply in Get Shorty to: “I’ve got an idea for a film.”? Response: “Doesn’t everybody?”. (Or was it in the screen play?) Anyway, that’s been the currency of Hollywood. The Carrot at the end of the badly painted gold shtick. So they hired Eric and it was off to Hollywood for Mr. & Mrs. Knight. The British educated film critic became a Hollywood Studio Employee.

They were living in Montgomery County where Jere had a kennel of collies. As, Hollywood was not yet safe for collies. The Knights went west alone. Jere’s collies, part of the price. From the beginning, there were more rocky roads in Hollywood than the Pennsylvania countryside. Eric did badly in committees where classics like Dante’s Inferno were rewritten comedies. Still, the handsome lady in blue did well. Mrs. Knight becoming assistant story editor for Selznik International Pictures. Her Hollywood was not without its problems either. (“Do you know people actually slept with each other to get jobs!” ”confided Jere on a spring morning over instant coffee. I admitted hearing rumors.)

Frustrated, Eric moved west of L.A. building himself a tiny house where he could farm and write fiction. Jere remained on salary in LA. The couple met on weekends. As the tail continues, Mrs. Knight joins Mr. Knight one Christmas morning. “Eric was wearing a tweed sport coat and in his pocket was my gift: a tiny collie. ” The pup became: “Toots”. Eric’s nickname for Jere when: “ I got on my high horse.” Akin to calling the serious blue lady a broad.” Toots became Eric’s constant companion while he wrote. Jere’s fortunes continued. Things limped along, maybe best described by Knight’s satiric 1938 Hollywood Noir Novel: You play the Black and the Red Comes Up.

“Getting the hell out of Dodge .”

Jere finally managed a transfer to New York City to become story editor for SIP there. “I rode the Super Chief, first class with an orchid pinned to my lapel. Eric spent most of the trip in the baggage car with Toots who was pregnant.” Toots and the Knights settled North of the city and Jere continued her work while Eric continued his novels and magazine pieces. In the late 30’s the three returned to Pennsylvania, finding Springhouse Farm in the rolling hills of Bucks County, which reminded Eric of his native Yorkshire. “We felt if we could grow our own food and live simply, we could spend more time writing what we wanted.” Jere fondly remembered washing her hair in the soft rain water collected from the small roof of the 18th century farmhouse. And how Eric took his typewriter and Toots off to the woods on a table he made himself. “When I hovered too close.”

Somewhere in that period, Eric sent Jere a note, perhaps a telegram, from a hotel in Yorkshire. Eric was writing a story for The Saturday Evening Post on the grim industrial areas of his youth. It said approximately: ”Hold on Jere, I’ve got an idea they can’t steal.” The idea became a novella for The Saturday Evening Post; a book with five first year editions (1940) that hasn’t been out of print since, and tons (by literal weight) of TV, films, and related merchandise. That “idea” was: Lassie Come Home. The story of a friend who would travel thousands of miles on your behalf, always be there for support, & never let you down. Toots, herself.

The backside of the story is similarly remarkable. Economically, the idea created fortunes. But not for Eric and his heirs. The agent sold “Lassie” for ten thousand bucks including all non-book rights. So, not a wooden sous for about 12 films, nine TV series and all the other commercial transactions. Considering the “unconscionable” recovery sections of the Copyright Act of 1976, I imagine a considerable silence in the legal departments of the “Lassie Industry.” It is Hollywood, Jake. Another film opens just now.

Idyllic doesn’t last. We have heard those rumors, too.

Eric’s next novel,: This Above All, published by Harper’s the following year gave the Knight’s financial security. And central heat for their home. But the big troubles were already brewing in Eric’s birth place. His novel set after the evacuation of Dunkirk spoke of love between the British classes and glorification of war among the young. A timely international best seller acquired at a handsome price by 20th Century.

Good news recedes fast. The Knight’s were separated once again, as the war pulled them apart. Eric back to the battles of Hollywood the Knight’s so fully loathed,. In response to a telegram from Frank Capra (Mr. Smith Goes to Washington) who was heading the Film production Section of the Army’s Special Services Division. Jere stayed on to manage the farm.

Although birthright Quakers, both Jere and Eric joined the war effort. Given to doing the right thing. Eric in Hollywood and Jere in London and DC where she became an assistant to Oveta Culp Hobby, head of the WAAC who had seen her Saturday Evening Post articles on British Women at war. A story itself. In the end, Major Jere Knight returned to Springhouse farm for another 50 years after Captain Eric Knight’s plane exploded in Surinam. Toot’s remains on the hillside pasture beneath her monument over looking the valley. A sentinel of Bucks County. Witness to it all. 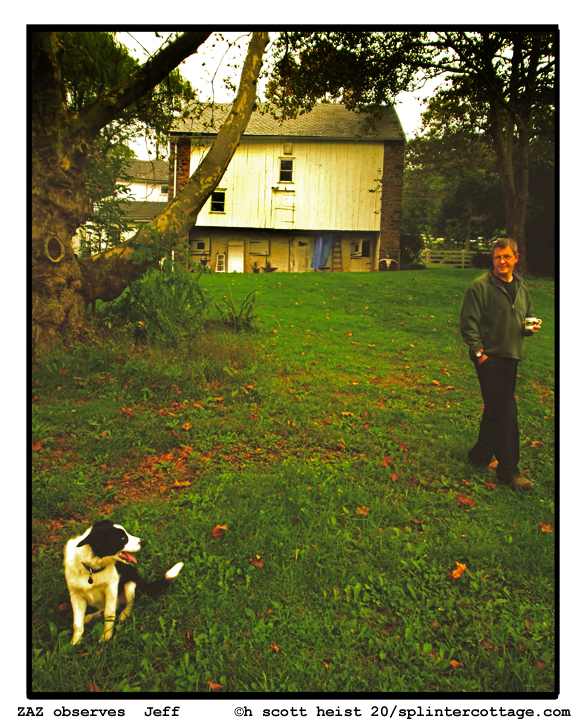 “Actually, it took a lot for me to finally bring another collie to the farm. “Zazz” is a border collie (like toots).” says Jeff Lindtner. Jere’s son who with his wife Barbara has brought Springhouse to its present authenticity. Stretching from the Lenope Rocks on the Mountain to the trout stream in the valley. Not Hollywood but Bucks county. A hell of a lot of real work. 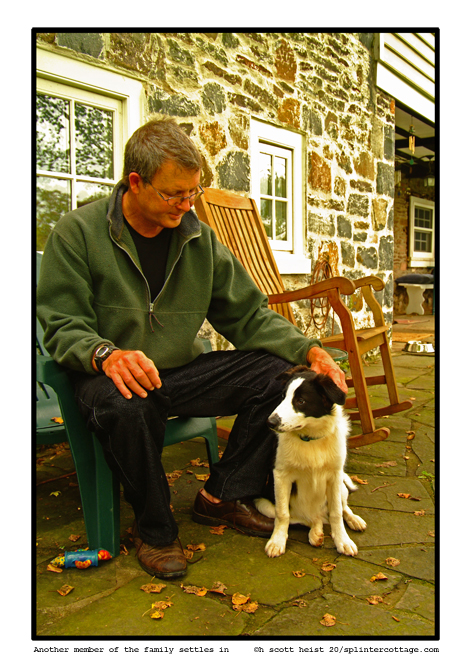 I got an e-mail from Jeff , not long ago. around the 10th anniversary of Jere’s passing. Thanking me for a large print of Jere and Maman Cat near the fireplace, sent in condolence. 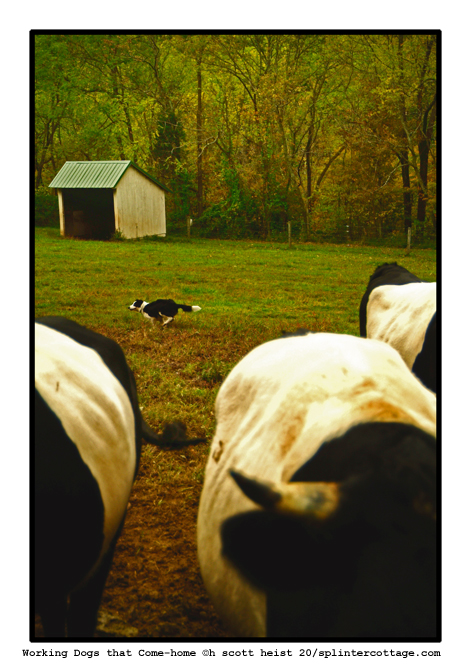 He told me he had some granite plaques made and placed them next to Toots. One for Toots, another for Blackie – Jere and Jeff’s collie, and one for Jere herself. 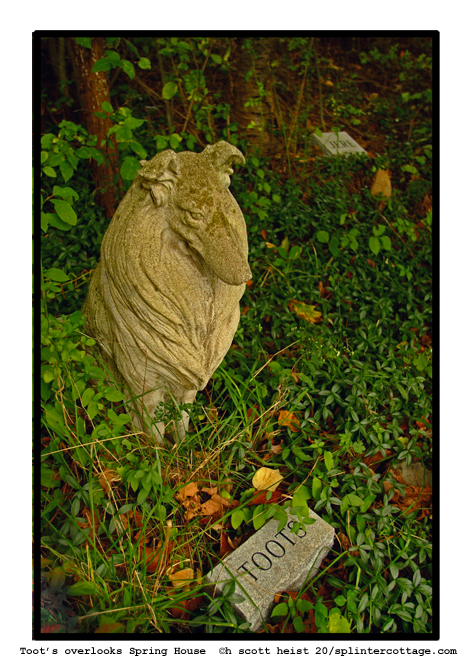 The Sentinel is no longer alone.

This is the professional of work of H. Scott Heist and all rights are reserved. Use only with written release, license, and permissions from SplinterCottage.Com or via SplinterCottage@AOL.Com.