Heritage: “what means this daddy?” A short walk on God’s Green Earth.

I’ve been thinking a great deal about heritage of the last few weeks. What it means and how it affects all of us. I know it’s primarily aesthetic appreciation. It fits nowhere else. Either something we share together or one more sadness in a what appears a long liturgy of scams.

This is Pennsylvania, which is important, as it was not the same sort of colonial enterprize … a the history of plunder and bastardization, that often fit, precariously, in a historical story,more marketing than truth. All nations not the United States in the least appear to be an exercise in marketing. As the marketing department is better funded than the ethics department and that somehow in “education” the two are different subjects, we can be sure that a profitable state of confusion exists to devil  us all.

As Templeton the Rat repeatedly askes in Charlotte’s Web, one of the great philosophic questions of mankind is: “what’s in it for me?”. Other than the association with Templeton, it’s not that bad a question. It’s the basis of every fair and equitable transaction. In an America, where the majority of citizens are increasingly separated from the bureaucracy of government working primarily on behalf of the interests that pay it, suspicion is reasonable. What is worse is that the layers of suspicion build one upon another, and in the end no one trusts anyone else. And that may not be unreasonable as it appears to be the training forced upon all of us. It takes no bravery to admit that this is not good thing.

The current difference between marketing and history is that history must bear some semblance to the truth. There was a time, that lying on behalf of profit, was not considered at least on its face, ethical. Once in a Doctor’s office I mentioned ethics and he asked me what they cost? He thought he was being clever, I did not. My response was: ” was good day.”. I know whatever brought us this is no good and I am perplexed is how to get the hell out of it. Heritage fits as the authenticity of our environment heralds back to a better time. Not so many words, well distanced from the repetition of universities.

There is a difference between the authentic work of our forefathers hands, and the faux building of Hollywood sets and make-believe developments. The point is the difference… not labeling one right or wrong, but simply appreciating the difference between authenticity and decoration. As one cannot be substituted for the other. At one point that was the role of documentary photojournalist.

Here, a simple exercise or essay on authenticity. Authenticity does not mean that things stay the same so much as they are true to their beginnings and within them we can see our cultural evolution. For perusal: a stone Springhouse at the base of the hill on what is now known the Springhouse Lane. (We are already in learning mode as we know the reasoning behind the name of the lane. )

At one time it furnished the water for the house, the coolness for what passed for refrigeration, and the potable drinking water. Originally they the primary source later supplemented by cisterns gathering rainwater from the roofs. I remember the former owner of the Springhouse telling me how wonderful the rainwater from the barrels was for washing her hair. It was free of the limestone that would’ve been in the spring or the well.

Before my cottage there’s a 20 foot hand dug well that we have never drawn from but has caused on endless problems backing up into our celler . The overflow simply follows the pipe once channeled to the hand pump. This followed the wooden bucket. Heritage can be a handful.

My assumption is that the farmhouse was located based upon the spring. The enclosure of the spring was quite likely at the same time as the initial building of the farmhouse. Its proximity neither accidental or incidental. Same for its materials. If we look at the woodwork the manner of the doors the hinges and indeed it’s fit into the topography… The way the stones fit together… Its authenticity tells us more about the geography, the size of its builders, the care with which they work. For all the structures. As its builders, they knew the peril was both to their water and the time it would take to rebuild.

Recently there was some question as to the preservation of the Springhouse and its proximity to the farmhouse itself. The answer is there for the looking. Not an iPhone photo, or an amiable but rather haphazard exposure, but in the sense of Marcus Aurelius: a contemplation of what these things are. Why they are and how they fit together. As mentioned earlier, I think heritage is an aesthetic concern. It relates to us as does our DNA.

As I was writing a previous proposal my mind wandered back to my dad, who I would ask: “what means this daddy?”. Dad and his brother were plowing this earth behind a mule when they were 9& 10 years old. Between the two of them they would achieve learning degrees from University of Chicago, Tulane, LSU, Lehigh University and Muhlenberg College. But in addition to those degrees in which they learned many things (among which for my uncle, was the cure for elephantiasis), they had the heritage of knowing how to plow and how that depended upon the care of the mule. And that life was indeed an analog experience in which one thing was built empirically upon and related to the next. That’s heritage. As well as science and mathematics.

Our great great great granddaddy came to Pennsylvania from Holland across the North Atlantic on a very very small ship. After migrating across Europe as pacifists in great trouble with all the quote: “nobility” that ruled that continent. They were not simply murdered for not fighting as they had the talent of growing a hell of a lot of food. And that’s what saved our lives. That he would not fight in their wars of plunder dearly vexed them.

So how he wound up fighting at Valley Forge perplexed me. I have for years ask myself: “ what God’s green earth could of caused him to say: “enough.” “. After thinking in terms of Marcus Aurelius to seei clearly, my conclusion is that it was “God’s green earth” and aquality of land and soil that he had never ever seen before. And that the and that’s the beauty of an aesthetic evaluation. The art of it all becomes supremely practical. That’s the heritage we share. And I would hope choose to conserve. 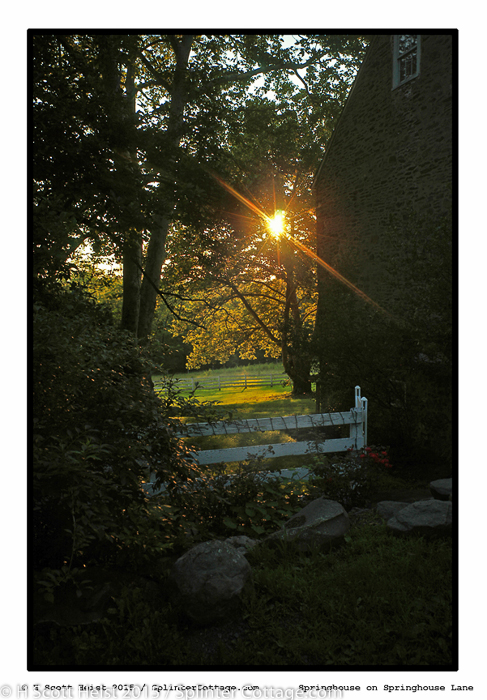 This is the work and creation of Scott Heist and all rights are reserved. Use is by written permission. The View from Splinter Cottage, Splinter Cottage, and Every Day is a Short Story & The Character in the Vines are trademarks in use for many years and similarly protected.