“Back to bridges.  Which I see as a promise between one generation and the next. And that 32 feet per second per second is a natural law to consider daily in the simple passage from one place to another. That natural law is not a threat or penalty, but rather the reality that holds us together. We are a part of it, like the Lenape holy areas … like Turtle Rock near the Frankenfield Bridge and up on Ghost mountain above Knecht’s … I’ve walked softly and with respect .. randomly learning, duly noting and then organizing in my journals … the miracles I’ve seen. So I guess I became a journalist as an extension of a childhood where I was taught to bear witness … and see the beauty and the art that others have done. I see the honest work of so many hands. Remaining in awe. “

From a letter to a friend.

As I’ve been photographing and doing the computer work on a least half of these for the past full week I’m tired. And I will write more reasonably later. My portfolios, I considered Dadaist Boxes … the case of the magi … if I placed the correct material in them … I wound up somewhere else. Meeting others with knowledge I didn’t have. So too the Bridges. From the early days when I drove through them, I left the neighborhood and meet the world. Without fear … as life functions on so many levels.

Once again, here at home, as I walked the bridges, as I’ve done far away, I met new people who know what I don’t and may become friends. But what we hold in keeping is a heritage of values, and these are represented by these bridges and their stories.

For example, three people have told me of their school bus stop .. a the base of these bridges, comments from Arizona, Pleasant Valley, and Erwina. A cold crisp Bucks County Day. Waiting for the Bus. Off to learn something new. Story of my life, shared.  I’ll leave it at that. For the moment. 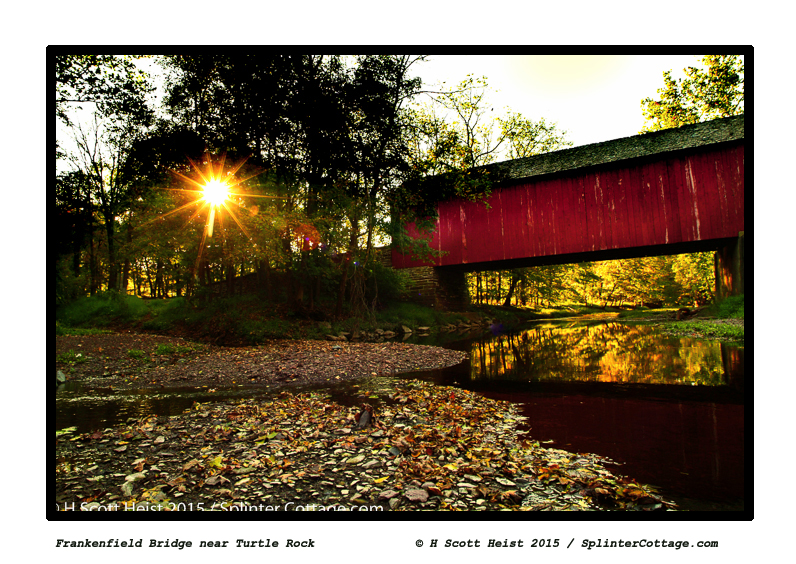 for lots of years I did travel section features for the New York Times … when it was all black and white. Dozens of times I was called by picture researchers insisting that I had the photo in color. Believe me their money would have been welcome and my reticence was not an effort to increase their irritation or my poverty. I was interested in how the mind translated images even to professionals. And there still are a few.  The obvious comment was to carry a color camera except real reportage photographs do not occur that way. Whenever we were forced to do both the natural gravitation to the real photogragh that share life … was always the “other”.

Digital has changed that somewhat and on certain occasions. Color remain color and is mostly a composition of hues and shades. Monochrome is texture contrast and tonal separation . Soft lite color can, occasionally,  respond to a reduction in that saturation. Moving into the Provence of the black and white impression. Not as decoration .. which I pretty much loathe, but as a communication proposition, the simple sentence with less adjectives.

Looking for that mental cross over that occurred in all that black and white work … at the Sunday Times. Tons of filters to make things work on news print …

True monchrome shot from the beginning with intention  is always most consistent as photographs like all sentences are written in the mind of the author. If te author is unaware of what is being said it is either happenstance or nonsense … simple commercial convenience … that last is not an aversion but a necessity to keeping cameras dry and the cats fed.

Some cameras are better at black and with than other, incredibly so. And the filter can be dialed in. I almost never discuss cameras but as tools some attend certain purposes than others.

these are from the above with reduced saturation … an experiment in perception and logic.. what the writer Richard Farina called “Celebrations for a Gray Day”.

Tumbler or just google for the museum bios etc.